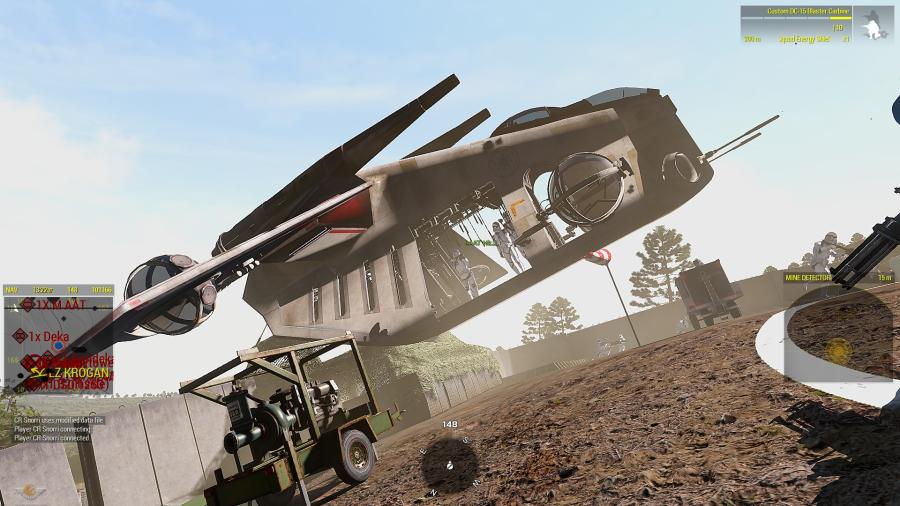 Greetings. Today's newsletter has some important information about one of the most distinctive detatchments of the 501st Legion. With the campaign resuming, the news team had a chance to talk to CC Lava about the Acklay airborne detatchment of the 501st. Whether it's their distinctive uniforms or their equally distinctive combat role, Acklay is a force to be reckoned with and serves their Republic well. CT Daku conducted an interview and he had the honor of writing the following story:

In our ever escalating conflict against the Separatist menace, one must recognize the value of striking a foe at their flanks or from where they least expect it. So in war, the way is to avoid what is strong, and strike at what is weak.

It is with this idea in mind, the Acklay Detachment paints its canvas across the fields of battle like the most exhilarated of artists, leaping from the battle hardened LAATs of our Razor pilots to the sodden ground of the enemy’s back-lines. This reporter caught up with the Acklay HQ Commander CC Lava to discuss further the ins and outs of these airborne warriors.

When asked what the Acklay detachment is, the LAAT Jumper responded:

“Acklay is an Airborne Detachment. We perform such duties as Infiltration behind enemy lines via High altitude Drops. General tasks usually are to raid, assassinate or disrupt enemy flow. Other duties include; Pathfinding, this is to find and secure LZ's for the main unit to start their assaults. Finally, QRF (Quick reaction force) to assist the main force when and where needed. Acklay practices these duties weekly to ensure we’re ready and efficient when called upon.”  - CC Lava

Inquiring more to this lieutenant regarding what this detachment and those within it mean to him as he continues his work from within, CC Lava replies further to this reporter:

“I have been in the detachment for 600 days now. I have watched it grow and change vastly in that time. To this day it is still ever changing. Simply put, to me it’s home. An area in which I can devote my time to the big picture, the 501st. I'm very proud to say I'm a part of the detachment and hope to nurture it further.” - CC Lava

Since the birth of this Reporter in the labs of Kamino, It’s worth noting that the Acklay detachment itself has grown into a platoon element, itself full of personality and talent from across the 501st legion and directed into fashioning a skilled asset for command to use to pick apart an enemy at their legs.

But to what plans are in the future for a fighting force such as these?:

“My plans for Acklay is minor currently. Acklay is updating our old SOPs to assist the 501st better. My near future plans would be a potential uniform update, it would be nice to have a new lick of paint. As I stated before Acklay is ever changing, given time who knows what the future may entail.” - CC Lava

As for you, fellow troopers of the 501st, you can apply yourself to achieve such a role of responsibility and high altitude by following this helpful advice that the reporter quizzed out of our Acklay Commander. When asked what would be said to those looking to join their detachment, CC Lava had this to say:

“To those interested I would say practice. I was new to this two years ago and thanks to the members both past and present I have learnt vast amounts and continue to do so. To me a good mindset is primarily the most important. Having an interest to learn, the initiative to do so and the patience to perfect yourself. You will fail, time and time again, but it is your job alone to persevere. Don’t ever be afraid of trying.” - CC Lava

But of course, this reporter left the final question of utmost importance to last. Something we’ve all been waiting for! Whilst this reporter has tried tirelessly to create an item worthy of infantry flight and to no success; I finally get to ask directly towards the holder of such technology.

“I’m afraid I only have jump packs in my arsenal. That's my polite declination.” - CC Lava

Maybe next time, indeed, Daku. While he figures out how to fly, I'd like to thank you all for continuing to read the 501st Newsletter. It is the dedicated work of our journalists like Daku that helps bring this news and stories like it to the public attention and the entire 501st Legion. We look forward to writing new articles and more great stories. Coming soon is the update for the ongoing Galactic Campaign and where the 501st will be deployed next. That and more in the 501st Newsletter... 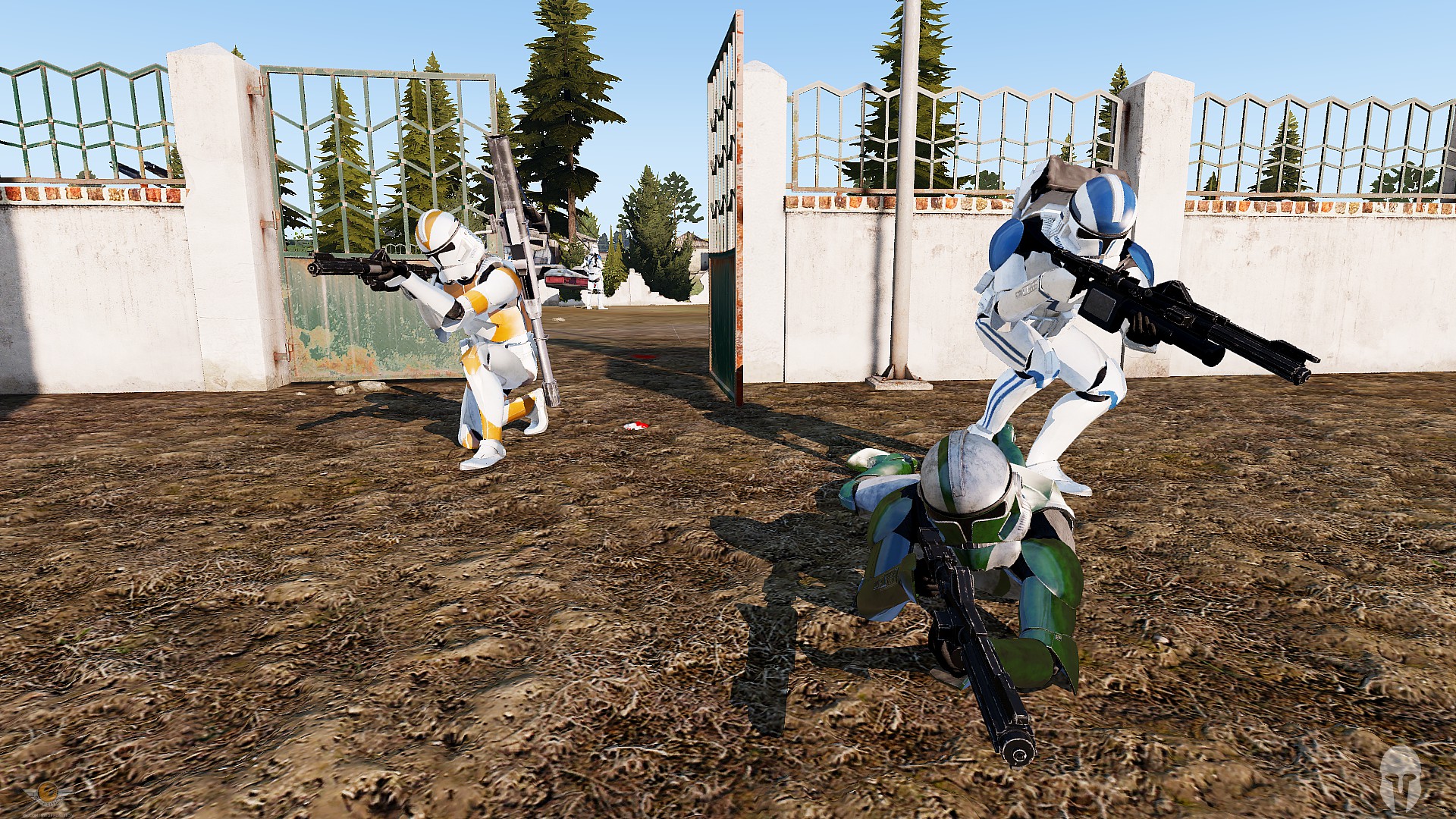 “We’re going to the Outlands” - BC Jay

“I'm back in action and ready to the bring the hammer down.” - CC Player

“1st platoon is ready to cut through the Savareen sector like a hot knife through butter.” -CS-M Point

“We're doing better than the other two below us.” - CS-M Crisis

This week we’ve begun training for our newest candidates, CI Flux and CM Singed. They’re very early in the training process and we look forward to seeing what they can bring to the table

“I lead my formations. Leadership is about the people in your charge, not being in charge of the people. If you want to be a leader here it'll do you good to remember that.” - CX Scuba

“Your foe is well equipped, well-trained, battle-hardened. He believes his gods are on his side. Let him believe what he will. We have the tanks on ours.” - CC Klein

“Coming to a conclusion stage of our testing”

"The Zeta campaign is going to be fabulous, way better than any pseudo campaign Coward or Crisis can cook up. And our team are working together here in house in Zeta Company is set to be the best trade deal, in the history of trade deals, of all time!" - CC Machete

During the battle of Mygeeto, there are multiple clones in the background wearing Commander Bacara's armor.

Lieutenant Euler has not seen the bright light of the God-Emperor of Mankind and his soul will be fed to the Gods of the Warp.

501st News opinion doesn’t necessarily reflect the opinion of the entire community. If you’d like to help the news team, you can in many ways, including but not limited to, signing up for the news team, submitting an article, posting a piece of media or getting publicity for an event. For those interested, please contact either CT Sideways or CI-C Daedalus for more information. Your voice matters, let it be heard. We’re currently looking for journalists to collect stories, media and content and story writers to write articles. Also please consider donating to the 501st to help pay for server costs and help keep this community alive and well maintained. Photo credits: CM Lissy, CC Lava and CX-X Orange. Additional graphics by: CT Shifty and CT Daku