THE UPDATE IS OUT

THE UPDATE IS OUT

STOP READING THE NEWS, GO GET IT

These 2 links will send you to a shady adfly-like website which you just wanna click the "skip ad button" on the top right and then it will take you to a google drive folder from where one downloads the mod archived. All other information can be found on youtube / google , it is very simple and straight forward. Enjoy, and wait patiently until the 16/1 when we will finally get our servers adapted to all the new stuff and have new updated mission files to play on.

Click that download button, enjoy life, take a nap, wake up tomorrow and play on our servers ! let's blast some shiny new clankers , in our shiny new armor ! ENJOY EVERYONE , AND DONATE TO THE SWOP MOD DEVELOPERS IF YOU DESIRE TO SUPPORT THEM! Or donate to us if you want to have a server over you head, both would be appreciated. I am very glad I finally get to break the news on this !

“I’ve known Estes, or Alex as he is known in real life for around 15 years.

He was a true friend.

On the two deployments I went, there was not a week that went by that he didn’t check on me and at least say what's up.

Even when all the other people I had known back home hadn’t.

Estes started out in the 212th and quickly rose to the rank of Sergeant and Squad leader. Almost completely due to the reputation and respect he garnered from his peers. It’s a shame to see him go.

I’ve had to deal with loss in combat environments from my tours, but nothing prepares you for the heartwrench of someone dying for no good reason.

But Alex didn’t care about that.

He acted like he wasn’t even sick up until the day he passed away.

He felt like he was a part of something greater than himself, and even in the last few months of his life, he still found time to devote to our community. Because he loved being a part of it.

We made him feel big, in a time where he felt small.

That as a community, we continue to give this experience to our members.

To be a team, a family, something greater, even if it’s just a silly Star Wars arma unit. 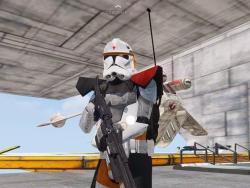 Clone Seargent 8008 "Estes" (Alex) from 212th Attack Battalion has past away on December 25th, 2017. Alex was fighting a long battle with cancer. Everyone is in a war with cancer, cancer takes beloved friends, mothers, fathers, grandparents, sons, daughters, and anyone. There is a fundraiser going on that CC-1337 "Six" from the 212th Attack Battalion has set up, here  is what he had to say:

"I will be starting a fundraiser if anyone is willing to donate to it. It will be GARC wide. The donations will be going to Alex's partner Lauren, who knows where Alex wanted to have anything donated. Alex also wished to give his higher end gaming PC to anyone that was still playing ARMA on a potato, so if you all can determine who that person may be, maybe someone who Alex knew the closest, I can facilitate that. The fact that the 212th was even brought up in his final requests should speak to how dearly he cared for all of you and our community, so keep that in your thoughts moving forward; Here is the fundraiser for Alex, the charity Alex wanted to have people donate to is in the description, and i posted a few pictures. Please spread the word around, and yoou can use your starsim designation as the name for the donation if you would like." - CC-1337 "Six" of the 212th Attack Battalion.

The image, and button bellow will take you to this fundraiser... Alex Estes was an honorable clone, and will always be rememberd here in the 501st Legion,

May The Force Be With You Alex Estes!