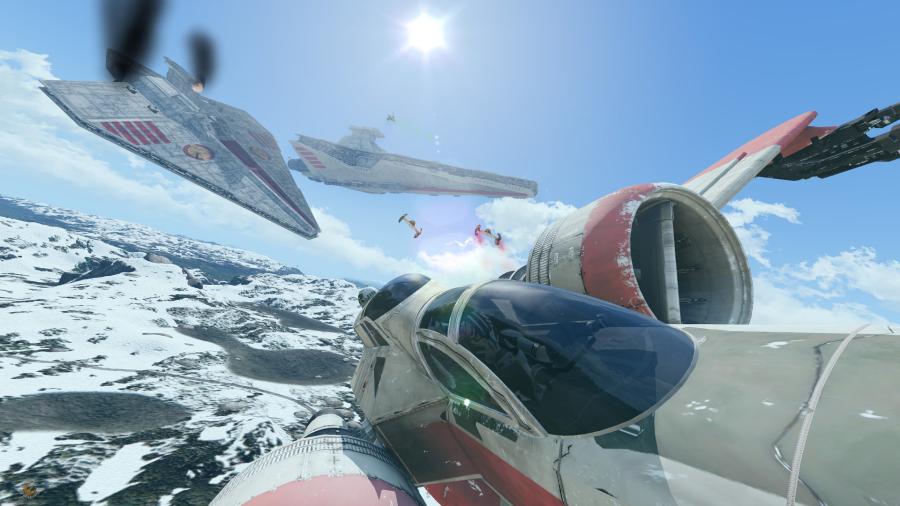 There were three events, the first two of which were platoon-level assessments while the final event pitted one squad against another. The games of 6/8/2019 were the Convoy Escort and the Mortar Run, and the competitive event on 6/15/2019 was the Squad Relay Race. The following is an account of the proceedings as described by one Avalanche Company squad leader.

On opening day, five Republic Bantha IFVs crewed by Mynock detachment sappers rolled out of a 501st vehicle depot for the first event, the Convoy Escort. Their objective: follow the road to the finish line a klick and a half away through hordes of CIS infantry squirming for their next field update, equipped with antitank weaponry and entrenched in prepared positions along a narrow road that wound through the precipitous heights and deep passes of the scenic Altis mountains.

The results for this event were as follows: 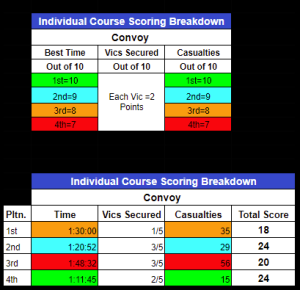 The results of this event determined the order of position for the rest of the festivities:

… AND FEAR NOT PAIN OR DEATH

Immediately following this gauntlet was the aptly named Mortar Run, which saw the 501st’s Mynock representatives turn on their Avalanche company counterparts. All squads from an infantry platoon lined up on the starting line which faced a barren no-man’s-land across which stood a small blue flag on a shell-shocked beach. Flanking the plain rose small hillocks upon which sat Mynock mortar crews. A whistle was sounded, and the mortar crews opened fire on the infantrymen as they attempted to reach the safety of the bombed-out beach.

The results for this event were as follows: 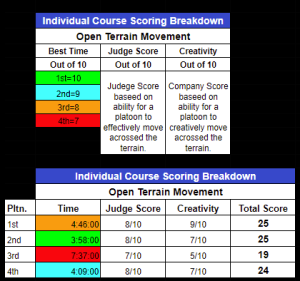 The order of positions of the Avalanche company platoons was as follows after the event:

The final event, the Squad Relay Race, took place the following weekend. The organizers worked tirelessly through the week so that when the sun rose on Saturday morning, a vast obstacle course cast a towering shadow over the salt flats.

The course was, in fact, two courses, each a mirror of the other. One squad would assume responsibility for the left course, while their opponents would assemble across from them on the right side. The objective of this course was to locate intelligence, which would provide the location of a CAS target.

One representative from each squad - with the exception of the medical leg and the support leg, both of which required two operatives - would run each leg at a time. The legs tested fundamental infantry skills: Riflery, Sharpshooting, Combat Medical, Tank Hunting, Support Gunnery, Grenadier Marksmanship, CQC and RT Operations. The squad leader ran above the course, yammering advice into the radio and inspiring their comrades with buffs and holy magic. The intelligence was located on the CQC On the final leg, each squad RT would call in an airstrike on their target, confirming the end of the race.

After the race concluded, penalties were assessed based on VIPs killed and designated targets left alive. These penalties became time values - numbers of seconds - that were added to each squad’s score. The squad with the fastest overall time was recognized. Each squad then totaled their times to get a platoon combined time. The platoons’ times and corresponding scores were then ordered to get the rankings for this event. 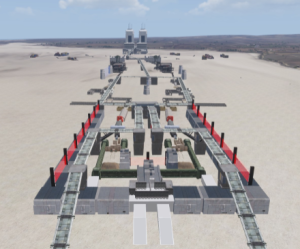 The view from the starting line. Note the elevated catwalks on each side.

The results from this event were as follows: 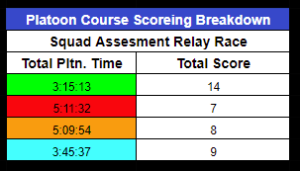 And the aggregate results for each platoon were:

The final standings of the Olympic Games were:

Yes, you read that right - there was a tie for first place! This will not be allowed to stand, and the brass will have its blood. A tiebreaker will be conducted between 1st and 4th platoons for first place at a later date. In the meantime, the campaign has begun! The 501st news team will be your source of delicious campaign digest in the coming weeks.

The Olympics were streamed live! You can watch footage of the event at the approved stream here:

“Verax promoted to BN CS-M Billet, for his hard work and dedicated to the unit. His promotion is a unanimous decision by command staff.” - BC Jay

“Proud of the way 1st Platoon performed in the Olympics and looking forward to the campaign.” - CS-M Point

“Glad the campaign is back.” - CX Scuba

"Verax has been stolen. I will never forgive this betrayal." - CP Fancy

Arma 3 is currently on sale thanks to the Steam Summer Sale, pick that up or it's DLC today!

501st News opinion doesn’t necessarily reflect the opinion of the entire community. If you’d like to help the news team, you can in many ways, including but not limited to, signing up for the news team, submitting an article, posting a piece of media or getting publicity for an event. For those interested, please contact either CT Sideways or CP Sense for more information. Your voice matters, let it be heard. We’re currently looking for journalists to collect stories, media and content and story writers to write articles. Also please consider donating to the 501st to help pay for server costs and help keep this community alive and well maintained. Photo credits: CT Rayne and the News team. Extra graphics by: CT Daku and CT Shifty